Green light – Think you know how to recycle? 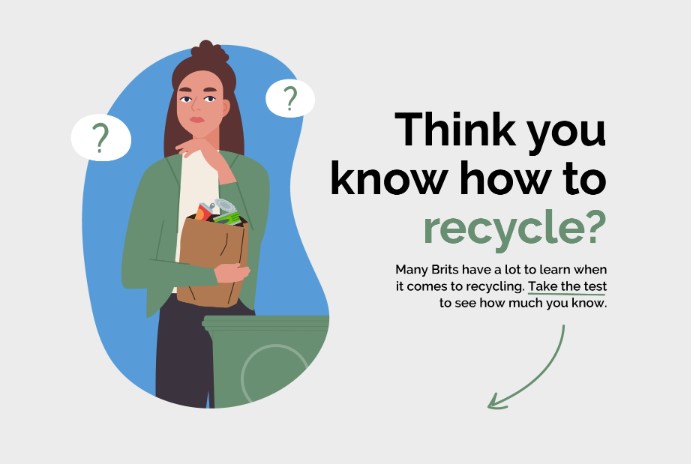 Nearly half of parents have been shamed by their own children – for bad recycling practises.

A poll of 2,000 mums and dads of school-aged children found 41 per cent believe it’s really their children who drive recycling and sustainability attitudes at home, thanks to the popularity of teenage environmental campaigner Greta Thunberg.

And 43 per cent have faced a telling off from their offspring for not making more effort with the recycling – an average of three times a week.

Of those told off, 56 per cent have been reprimanded for throwing something like a can in the bin instead of recycling it, while four in 10 have had words for buying items in non-recyclable packaging.

Another 35 per cent have been reprimanded by youngsters for not washing out cans or jars properly before putting them out with the recycling.

But the study, by the Metal Packaging Manufacturers Association, found more than a third of parents admitted their children know more about the environment and recycling than they do.

And seven in 10 blame their own confusion about what can and can’t be recycled for their fall outs with their children.

A spokesman for the Metal Packaging Manufacturers Association, said: “Recycling has come on in leaps and bounds even in the last few years – things that weren’t able to be recycled by councils are now much more widely re-usable.

“Because of this, children now learning about how to be green at school, and figures like Greta Thunberg proving popular, many youngsters know more about recycling than their parents.

“It’s great to see that so many parents are being picked up on things they may not be doing correctly when it comes to recycling – even if it is by their children.

“Children are very enthusiastic about the environment and it could be an opportunity for people to learn more about what they can be doing more of to improve their recycling – even if it’s as simple as remembering to recycle a can instead of just throwing it away.”

The study also found 35 per cent of parents are happy to admit their offspring care more about recycling than they do themselves.

And while 28 per cent of those who have been ‘eco-shamed’ by their children felt ashamed and 33 per cent felt guilty, four in 10 were proud of them for picking them up on it.

More than a third were also happy that their children cared so much about the environment.

Two thirds of parents think their children’s eco-education comes from school, while another fifth put it down to simple internet research.

Newspapers account for 10 per cent of sustainability knowledge in kids, while a quarter get it from green-leaning TV shows.

But a third say their children ‘look up to’ Greta Thunberg, leading to a passion for being green.

Almost half (45 per cent) of parents are even influenced by their kids to ‘think green’ when food shopping, with more than half encouraged by their offspring to buy items in packaging like cans or cardboard which can be recycled.

However, despite the prompting from their children, one in five parents often throw things out that could be recycled because they’re confused about what can and can’t go in the green bin.

Despite nine in 10 people thinking that tin cans can be recycled, more than a fifth had no idea that you can recycle metal paint cans.

As a result, while 10 per cent admitted to being more likely to throw a can into the bin than recycling it, 24 per cent would do the same with metal paint pots.

Almost half of those polled, via OnePoll, even admitted they sometimes throw recyclable items out with the rubbish because it is easier than trying to work out whether it can be recycled.

And 46 per cent have binned a can because they couldn’t be bothered to wash it out, even though four in 10 are aware that this isn’t essential to the recycling process.

Many also know more than they think about how to recycle metal packaging, with more than eight in 10 aware you don’t have to crush cans, while three quarters know you don’t need to remove paper labels.

The MPMA’s spokesman added: “Even now, there’s a lot of confusion among consumers about what counts as recyclable waste.

“Things like cans of paint, old technology like phones and keyboards, and even trays from fruit punnets leave millions in a flap.

“This is why it’s so important that the younger generation keeps up their interest in helping save the planet – beginning with their own homes.”